By Twin Cities Youth Rowing Club
Updated: February 25, 2013
Tweet
Tweet
Twin Cities Youth Rowing was founded in 2008 by experienced coaches, parents and rowers who wanted to make the sport of rowing more accessible to youth.  TCYR is a 501(c)(3) non-profit organization dedicated to providing rowing opportunities for high school students throughout the Twin Cities metro area.   At present, there are students from more than 35 different high schools on our crew. TCYR provides young athletes the opportunity to participate on a competitive rowing team under the guidance of paid coaches in a safe environment geared towards teenage athletes. 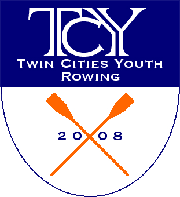 Today, rowing is a yearlong sport and TCYR provides opportunities for students to train throughout the year either at our boathouse or at Bryant Lake or at the University of Minnesota’s water tanks.  The difference between the fall and spring seasons is similar to the difference between cross-country and track.   Fall races are called head races and generally take place on rivers.  Head races are three to five kilometers long which means a rower will typically race from between 15 to 25 minutes.  Head racing is a timed event with each boat starting approximately 30 seconds apart.  The boat with the fastest time wins.  Spring and summer races are between 1500 and 2000 meters in length and are called sprint races.  Sprint races are generally rowed on a buoyed six lane course.  All six boats start at the same time and the first boat to cross the finish line wins.  These races typically take between 6 and 8 minutes.  The winter season is generally devoted to training indoors where most of the training is done on an indoor rowing machine called the ergometer.

Rowing regattas consists of many separate events much like track and field competitions.  The main difference between the events lies in the difference between sweep rowing and sculling.  Sweep rowing is when each rower in the boat has one oar.  This type of rowing is typically more prominent at the high school and collegiate level.  Sweep boats come in three classes: pairs, fours, and eights.  As the names imply, pairs have two oars with one on port and one on starboard.  Fours have four oars, and eights have eight oars.  Typically, fours and eights also carry a coxswain who steers the boat, keeps the rowers together, and executes the race plan. Eights remain the most popular event at the collegiate level.

How to get started in rowing with TCYRC:

Despite its growing popularity, most rowers still begin as freshmen, whether in high school or in college.  For high school students new to rowing, the novice program will help them learn the basics of rowing and they can compete against other novice teams at regattas.  Rowing is fairly unique in that a high school student can join as a novice and after a year return to row with the varsity team.
TCYR offers a middle school development program (aka “gROWth“) in the summer is the perfect way for 7th or 8th graders to gain a basic understanding of the sport while working on conditioning.  Later, the winter before they begin high school they can sign up to join the competitive crew team.

Enter your name and email below.