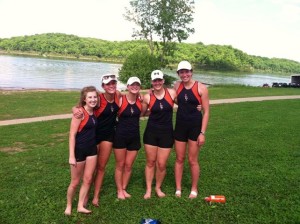 Congratulations to the Girls 1st Boat Varsity 4+ for placing 7th in the nation last year!  For those who didn’t get to watch the semi-final race on Saturday, June 8, 2013  you missed a good one, with the girls taking 4th place; only .22 seconds from qualifying for the Grand Finals with an official time of 7:46:12.  Everyone was holding their breath at the photo finish, with less than one second between the 2nd, 3rd, and 4th boats.  The girls raced in the Petite Final on Sunday, June 9th.  They took the lead early on, maintained it the entire race, and came in first, with an official time of 7:40:75, ranking them 7th in the nation.  You represented us well, girls.  GREAT JOB!

The 2013 USRowing Youth National Championships were held June 7-9, 2013 in Oak Ridge, Tennessee.  The regatta was attended by the TCYR Girls 1st Boat Varsity 4+.  They qualified for this competition by placing first at the Midwest Junior Rowing Championships held May 18-19, 2013.

Enter your name and email below.